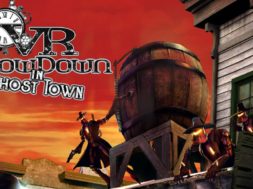 There’s been a lot of movement within the industry with entrepreneurs, startups, and corporations releasing their own unique VR experiences in a VR arena environment. The latest to be added onto the list is Knott’s Berry Farm.

In partnership with VRstudios, Knott’s Berry Farm has launched the first permanent installation of a free-roaming, multi-player VR experience in a U.S. theme park called VR Showdown In Ghost Town. This arena adventure will take you on a time travel adventure in a virtual futuristic Ghost Town where you come face-to-face with hordes of robotic enemies. Your object will be to defend the town with other groups of players while dodging and crouching through an immersive virtual world.

Go on a time traveling adventure in a virtual futuristic Ghost Town and come face-to-face with hordes of robotic enemies as you embark on a daring mission with other groups of players to defend the town. Blast, dodge and crouch through an interactive 360 degree VR world. VR Showdown In Ghost Town is the first and only permanent full motion virtual reality experience in a U.S. theme park. multiple players will compete against one another for the highest score and bragging rights, as part of this immersive adventure, while striving toward shared team goals. At the end of the VR competition, guests will be able to view and compare scores with their fellow opponents.

The experience will be $6 per person and is an additional fee on top of the purchased theme-park tickets. The headsets are its own proprietary hardware. The theme park will not be using the Oculus Rift nor HTC Vive to power this experience. Knott’s Berry Farm is recommending VR Showdown In Ghost Town for children 13 and older. If you have some time this summer, make sure to go check out the experience and see what it’s all about!