Kingsman: The Golden Circle Will Be Featured In 270-Degree ScreenX Format 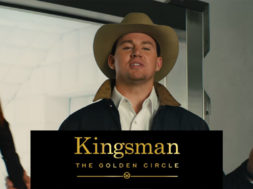 Kingsman: The Golden Circle Will Be Featured In 270-Degree ScreenX Format

A lot of Hollywood studios today have been releasing featured content in 180 to 360 video formats. It provides an immersive experience where viewers have a chance to experience videos in a whole different way. But 20th Century Fox is looking to take a bold step and test out CJ’s new 270-degree panoramic film projection system called ScreenX with their upcoming movie, Kingsman: The Golden Circle.

ScreenX is a three wall system that’s projected in a way that immerses you in a whole new way. The audience will have the ability to turn their heads left and right to see the finer details in movies. Currently, there are only three venues in the United States that houses this new technology. They are located in Los Angeles and Las Vegas. ScreenX is more currently more prevalent in places such as South Korea where they have converted multiple movies to fit the 270-degree format.

“As we grow our presence and footprint here in the States, we’re excited to continue to work with top studios like 20th Century Fox to really produce and provide quality content for film viewers around the world. We’re confident that the beautifully shot Kingsman: The Golden Circle will wow fans as they witness the film spanning three walls inside a ScreenX auditorium, or enjoy the action and unique experience provided by 4DX,” said Byung-Hwan Choi, CEO, CJ 4DPLEX.

Kingsman: The Golden Circle will be available in ScreenX in six different countries, playing at 119 locations including Korea, China, Thailand, Turkey, Indonesia and the United States. Stateside, the movie will be available to see on ScreenX at the CGV theater in Los Angeles.

“ScreenX is a visually beautiful and immersive format that transcends the traditional cinema and movie theatre experience. We’re looking forward to the second installment of the Kingsman franchise to debut in the 270-degree viewing format, and anticipate our fans around the globe to be astonished and immersed in the best way possible,” said Andrew Cripps, President of International Distribution, 20th Century Fox in a statement.

Kingsman: The Golden Circle is set to release on September 22, 2017. If you are in the Los Angeles area, make sure to check out the movie on ScreenX to see what a 270-degree film looks like.