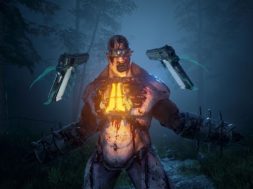 In Killing Floor: Incursion, players must take on the role of an elite Horzine Security Forces soldier as they team up with allies to fend off the horrific Zed hordes using an array of weapons including guns, blades and more. Players will be able to freely explore as they move throughout the environment, scavenging for weapons and ammo while searching for the best locations to fight the monster onslaught. Players will also battle in diverse environments from creepy farmhouses to high-tech facilities through Horzine Security Forces missions and unlock the secrets of the Zeds’ origins.

Oculus had the opportunity to speak with Tripwire Interactive about the upcoming VR game and they mentioned that the Killing Floor: Incursion is a game that everyone should look forward to.

“One of our focus testers literally tried to jump on top of a table in the real world after the spider-human hybrid Crawler character approached her,” says Tripwire President and Co-Owner John Gibson. “She was screaming so loud that people from all over our office came into the room because they thought she was in pain. It turned out she just had a very large fear of spiders.”

“We had this really nice, soft-spoken girl at a trade show who thought Incursion might be too scary,” adds Project Lead Leland Scali. “As soon as she had two axes in her hands, everything changed. She started dismembering everything in sight and laughing like crazy. I was her co-op partner, and I swear, I barely got a chance to hit anything. She went on a rampage. I’ve never seen such a 180 in personality before—it was great.”

Tripwire Interactive is made up of quality individuals who strive to provide gamers with the best quality experiences and stories. This is the first VR game that the team has built and looks to continue the successful lineage in their award winning horror franchise. You can pre-order Killing Floor: Incursion today at the Oculus Store for $35.99 with a 10% discount.