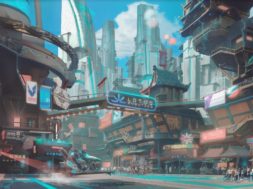 Inspired by anime and JRPG classics and reimagined as a dynamic living world with cross-play between VR platforms and PC, Zenith is set to create a futuristic universe in which players will fight, craft, explore, and live as they forge alliances and friendships in guilds and parties. In the game world, the city of Zenith has been sheltered from the mayhem unleashed by the crash of a massive starship.

Co-founders of Ramen VR, Andy Tsen and Laruen Frazier, have a decade of experience at Unity and Google. The two met at an Oculus convention and launched a VR title where they familiarized themselves in the VR space. Now they look to launch this amitious plan and create a unique world that virtual reality has yet to see.

“Zenith is our passion project, as we want to share the dream of a living anime world that players can experience on VR and PC without limitations,” said Lauren Frazier, co-founder of Ramen VR. “We invite RPG fans to join us on our journey and imagine their lives as legendary anime heroes!”

The game’s technology is powered by Spatial OS, which the team believes is the most advanced MMORPG platform. Spatial OS enables the creation of large and dynamic open worlds. The platform will enable real physics, complex AI, and a landscape that evolves and is shaped by players and NPCs alike. There are also plans to use Spatial OS for features like conquerable player settlements, crafting, and customizable player housing.

“We view our backers and our community as co-creators with us,” said Andy Tsen, co-founder of Ramen VR. “We believe the more support we raise from Kickstarter backers who believe in the game, the more we’ll be able to realize the vision we all share.”

Cross-Platform Play: Players who don’t yet have VR can play on PC in the same world as VR players—no one is left out of the adventure.

Class and Character Customization: Play your character exactly as you want, with every class able to become each role, depending on which skills are equipped.

Advanced AI: An immersive world filled with believable characters and AI—monsters will dodge, hide, and hunt in lifelike ways and AI avatars allow characters to continue playing with other people while their players are offline.

Streamlined, Physical Combat System: Leverage the physicality of VR for satisfying gameplay using timing and rhythm; pull earth shields out of the ground, suck creatures in by fast balling a gravity well, or simply blast them using chain lightning

Zenith had a goal to raise $25,000 for this ambitious project but has already received more than $104,000 in pledges. As a matter of fact, the game was fully funded in 4 hours time. You can still back the game today for alpha testing and more.