Khronos Group first announced an initiative last year where they looked to release an open API for cross-platform compatibility across the major VR platforms. This in essence would allow creativity, content, and quality to be shared among the giants like Oculus, Google, Valve, Samsung, and HTC. The listed companies are all major players in the VR space with endeavors in pushing the boundaries of our current virtual reality technology. They have all developed headsets with their own integrations and exclusivity to certain VR titles. This has swayed the community to pledge allegiance for certain manufacturers rather than coming together and sharing their experiences. Luckily, the Khronos Group has made progress on their cross-platform software, which is now called ‘OpenXR.’

The Khronos Group has recently completed it’s exploratory process and decided on the name for the cross-platform software. They are working with most of the mentioned companies on creating an open and royalty-free standard for VR and AR applications and devices. “OpenXR will encourage innovation while accelerating market growth and user adoption,” according to the Khronos Group.

A great aspect about OpenXR is that it’ll allow developers to create VR content for one singular platform rather than developing content for individual ones. This usually puts a lot of pressure on developers and studios to pick and choose where they want to release the VR experience. This led to many exclusives in the industry.

On the hardware side, companies have to convince both application developers, as well as game engine providers, to support their new devices. This presents a ‘chicken and an egg’ problem: software developers are often reluctant to support hardware that does not have a large footprint in the market, while getting to this large footprint depends on getting quality content and developers tool that are compatible with this hardware.

Below is the current chart of how integrations work with cross-platform APIs and game engines. 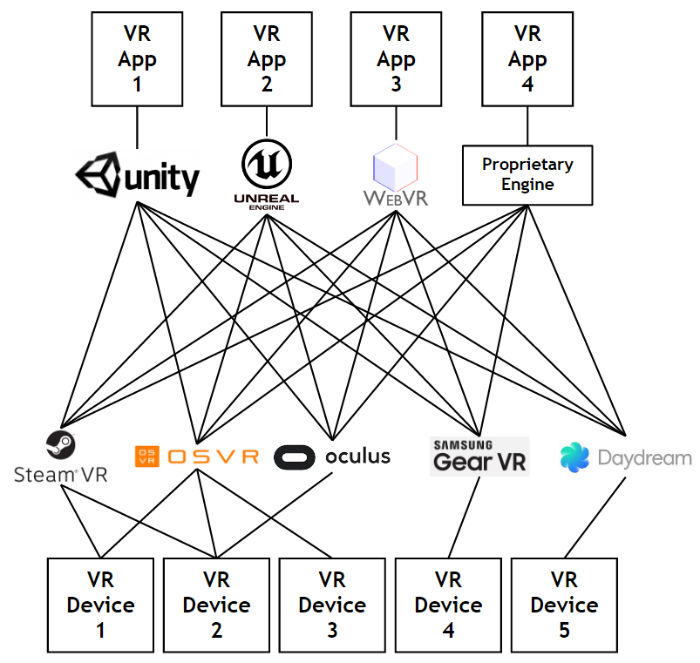 As you can tell, this isn’t a pretty sight to see. There are many complications and processes that led to exclusive releases and non-compatibility issues across the major platforms. The OpenXR team believes that they can help solve these problems through standardization. OpenXR will allow application developers to spend more time on creating the needed VR content rather than focusing on where their content needs to be.

The OpenXR will come in two folds. The first part of OpenXR is the the Application Interface. This is where developers and middleware providers will write to. OpenXR will serve to define and combine common cross-platform functionality, ultimately allowing application developers to write the correct code that runs on compatible devices. Developers will only have to support and manage through one platform versus the many. 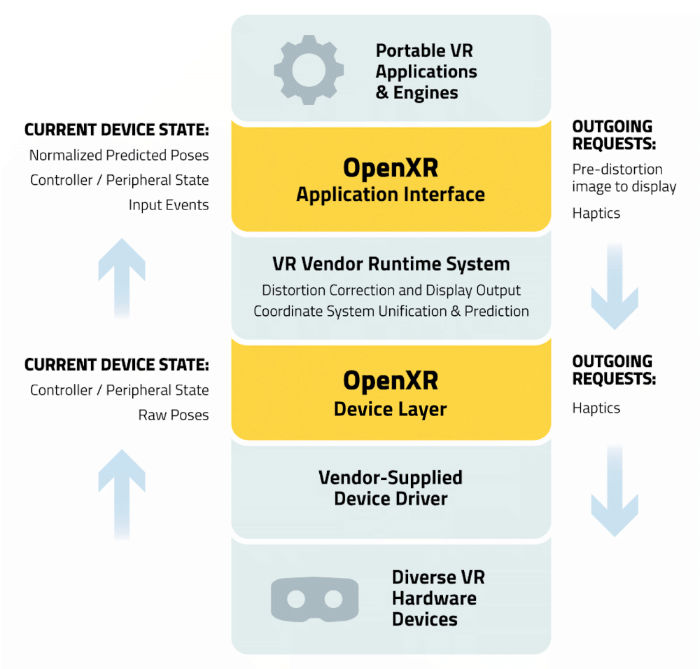 The second fold to OpenXR is the Device Layer. This will allow VR and AR runtimes to interface with various devices. If one of the hardware manufacturer wants to add support for a new device, they can implement the code that conforms to Device Layer specifications. Then, their new hardware will become compaible with the applications written for the Application Layer. 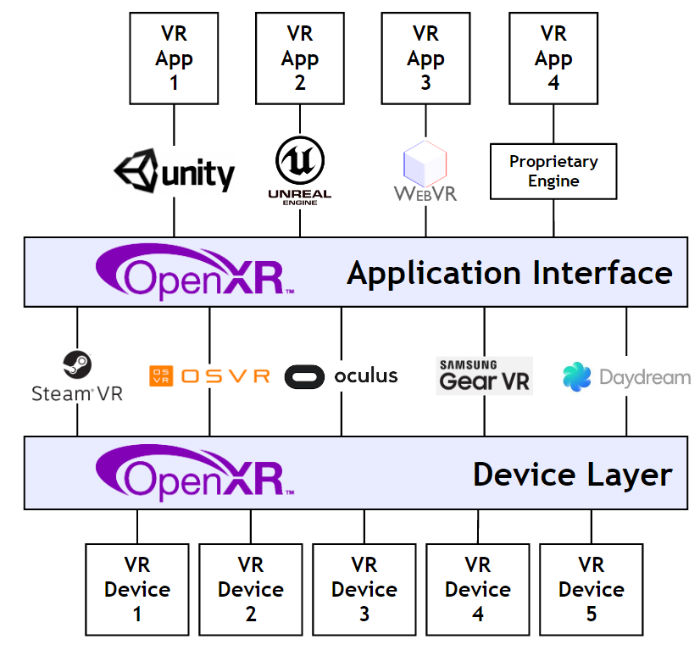 Here are the groups that are currently partners in the OpenXR initiative:

“With VR on the verge of rapid growth across all of the major platform families, this new Khronos open standards initiative is very timely. We at Epic Games will wholeheartedly contribute to the effort, and we’ll adopt and support the resulting API in Unreal Engine,” said Tim Sweeney, founder & CEO, Epic Games.

The Khronos Group has been at work in creating OpenXR with the companies listed above. But an interesting point you’ll notice is that HTC Vive is not listed as one of them. The perception has been that HTC is open to cross-platform standards while Oculus is more focused on building its own platform and brand. But, according to the picture, the script has flipped with Oculus joining the OpenXR initiative.

To address this alarm, an HTC spokesperson has mentioned that the Vive team is in talks with Khronos on joining this initiative along with the other major players in the VR industry. HTC understands the vital importance of an open platform in the VR industry.

But one question remains. Is this a deterrent platform from standardizing VR on Windows so that Microsoft doesn’t own the PC market? We understand that Microsoft has taken initiative on creating their own cross-platform with the likes of Acer, Dell, HP, 3Glasses, Asus, and Lenovo. This question will soon be foretold.