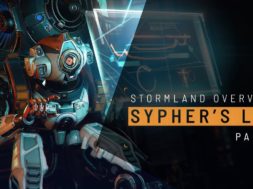 Stormland is set to make the big buzz around the community with its officiale release date set for Novemeber 14th. If you haven’t heard about the upcoming AAA VR game you can get more information here. For those that are familiar, there’s been some new key insight information released.

In the video above you can see the first mission log by Sypher where he describes whats been happening in the world. He states that every 7 days the whole world changes which can go from a forest like planet that changes into a desert environment.

Your enemies in the game will be called the Tempest as you search for remaining human life. You will ascend through 3 strata, each dense with exotic wildlife, entrenched enemies, diverse objectives, and hidden secrets. Players will scan for resources, threats, and weapons. With each discovery, you grow stronger and get one step closer to understanding the destiny of your people.

You can see that the world and graphics look crisp with a lot of details within the world. An interesting thing to Stormland is that there will also be co-op settings so you can play with others.

According to Oculus and Insomniac Games, they will be releasing clips that showcases what you can expect from the game each week leading up to the release of the game.

Stormland will be available for $39.99 on the Oculus Rift and Rift S starting November 14th. So there will be around 3 new videos leading up to the release of the game.