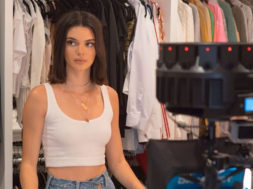 Kendall Jenner VR is happening. Google’s latest Daydream VR series will be focusing on trends and high-fashion from some of the biggest celebrities today. The series, which is called Supermodel Closets, was put together in partnership with Vogue and Condé Nast Entertainment to celebrate the publication’s famed September issue and its 125th anniversary.

Supermodel Closets is one of the first projects that uses Google’s newest Jump camera called the Yi Halo. This rig is capable of capturing an environment in 360 degree and immersive stereoscopic 4K content. Google has even noted that they were even able to easily use the new camera in tight spaces in each closet.

In the first episode you can see Kendall Jenner give us a tour around her two gigantic closets full of the latest fashion attire such as Hermes and other designer clothes. In the first closet, Kendall gives us some insights to her favorite clothing such as the matching pajamas that her family wears on Christmas day or her favorite pair of boots she got from Kanye West.

Kendall Jenner’s second closet is more so used as a fitting room where she can try on her favorite attire. It brimmed with the latest fashion where she can mix and match her outfit for the day.

Google will be releasing four more similar episodes featuring other super models and their gigantic closets. You can catch the first episode on Google Daydream today.