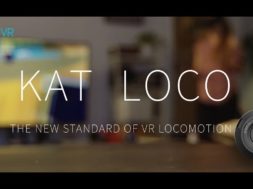 Throughout the years, virtual reality locomotion has been approached from many different angles, and it shouldn’t surprise us at all. Locomotion is one of the main pillars of modern VR experience next to vision and manual interactions. Without it, we wouldn’t be able to fully immerse ourselves into virtual world just like we wouldn’t be able to fully experience the real one without ever leaving our gamers’ pits. Locomotion lets us wander through virtual reality and experience all of its wonders. And it seems we’re about to discover a completely new way to do that.

KAT loco is a new solution that has launched and is live on Kickstarter. It’s a foot-based VR locomotion system that gives complete physical control over lower-body actions, allowing you to freely walk, run, and carry out just any other movement in virtual world as you move on the spot in reality. According to the developer, thanks to its complex algorithms and roomscale support, it allows to perform almost any physical action (even going prone!) providing a complete VR locomotion experience available from home.

A great chance for dozens of VR Niches

The company has put together an affordable price with a simplistic wireless design that lets you take KAT loco almost anywhere might create great opportunities for many smaller VR entertainment and business niches. The very idea behind KAT loco makes it really versatile, and we can see the system being successfully adapted to interactive education in schools and museum, virtual reality tourism, fitness and even industrial trainings.

Being able to simply walk, run, and carry out other physical actions on limited real-life space, you should be able to use KAT loco at your home, at work or at any other place that allows you to set up your HMD’s tracking.

According to the developer, the system is both easy to wear and use and only requires a new player to fasten the sensor’s straps around ankles and place the waist sensor on belt what can be completed in just a few seconds. If that’s the case, even one loco could be easily used by dozens if not tens of dozens of people throughout a day making it a perfect device for almost any public application. It also doesn’t require any training.

Life-changer for both users and developers

Until recently one of the main problems with virtual reality was high retail price of basic equipment to even start with. Comparatively high costs of VR gaming PCs, and the HMD made experiencing virtual reality an expensive hobby.

Things are slowly changing though evidenced through some new hardware such as the Oculus Quest and KAT loco. With more and more people being able to afford high-quality virtual reality experiences, developers will certainly follow creating more high-quality content. We can’t wait to see new games and VR applications that are able to integrate technology such as KAT loco.

For those of you interested, KAT loco is live on Kickstarter now. Make sure to check it out.

tags: katvr loco vr kickstarter vr movement
previous What To Expect From Oculus At E3 2019
next A New Level Coming For 'I Expect You To Die' In VR
Related Posts