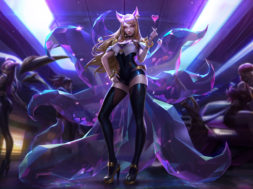 Beat Saber has taken over the virtual world this year by storm. With your duel-wielding sabers, you’re able to crush the oncoming beats with the swing of your sword and now you get to do it with the hit track Pop/Stars by K/DA.

For those unaware, K/DA is a pop group formed by Riot Games. It consists of two members from rookie K-Pop group (G)-idle, Soyeon and Miyeon, Madison Beer, and Jaira Burns. The group was launched prior to the League Of Legends Worlds 2018 championship where the best LoL players in the world united to participate in the event.

“The moment we listened to ‘POP/STARS’ we knew for sure this is going to be a hit in Beat Saber,” said Jaroslav Beck, Beat Games CEO. “The track is so pulsing and the video is just epic—it matches our game perfectly. We are so excited that with Beat Saber, players finally get a chance to experience ‘POP/STARS’ on a whole new level and literally feel every beat.”

Since then, the hit song has amassed over 123 million views on YouTube, reached #1 on Billboard World Digital Songs, received millions of plays on Spotify, and has garnered love from millions around the world. K/DA itself is a digital pop group represented by characters in the League of Legends game.

K/DA has been created for gamers and music listeners and makes a perfect home in Beat Saber. “We’ve been blown away by the reaction to ‘POP/STARS’ and the variety of amazing adaptations that content creators from both the League community and beyond have brought to life,” said Tom Ebsworth, EU Marketing Director for Riot Games. “As huge Beat Saber fans ourselves, both of the game and Beat Games who share our passion for gaming and music, it was a no-brainer that this crossover needed to exist. We’re excited to give fans of the song a new way to experience it and to hear what they think!”