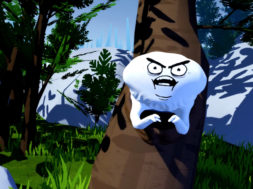 Accounting+ by Squanch Games and Crows Crows Crows is now available on Steam for the HTC Vive and Oculus Rift users. The game was previously released on a timed-exclusive for PlayStation VR but now the PC VR users get to enjoy the unique experience.

Justin Roiland creator of Rick and Morty is the CCO at Squanch Games. The game features various activities in the VR accounting world with levels that’ll put your intelligence to the test. The team describes it as a “nightmare adventure comedy” where you’ll have to clean up your office, take the battery out of the cooling machine, play the skeleton xylophone, and/or summon thousands of demons. This is pretty much a game you’d expect from Justin Roiland, let’s just put it at that.

You can grab a copy of the game today on Steam for $10.19. They currently have a 15% discount sale going on so make sure to grab the game while you can.