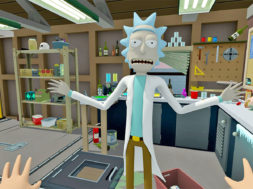 The Rick and Morty: Virtual Rick-Ality VR Experience was just released on the Steam Store for HTC Vive. We’re still waiting for its Oculus release which should happen any minute now!

Now, Rick and Morty can teleport into your living room for a cutting-edge VR adventure from Adult Swim Games and Owlchemy Labs. In this game you will play as Morty’s clone (and endure all the trauma that comes with it!) as you explore Rick’s garage, the Smith household, and alien worlds. Step through portals, help Rick with his bizarre experiments, and use your hands in VR to pick up and play in an interaction-filled 3D Rick-ality. Follow Rick’s directions (or don’t!) to solve puzzles and complete missions in this fully voice acted adventure.

Features:
-It’s your favorite 2D characters in 3D. It’s RICK AND MORTY VR! They’re 3D now!
-Probe, prod, throw, and smash iconic items like the Plumbus.
-Also, it’s got this thing!
-Teleport around rooms and walk through portals.
-No really! You walk with your actual feet through virtual portals!
-Get yelled at by Rick, and question your own self worth.
-Smack Rick in the face.
-Real fake doors!

We’ve been waiting for this release since earlier in the month (check out our previous post here) and fans are already going wild for this wacky sci-fi comedy tv series gone VR that was just launched less than a half hour ago! Have you tried the game yet? Let us know what you think in the comment section below!