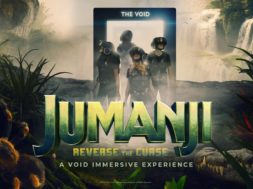 In true VR glory, “Jumanji: Reverse The Curse” is coming to the virtual world. Sony Pictures in association with The Void announced that they will be bringing the franchise to The Void experience centers where fans can immersive themselves in the exciting jungle world.

Prior to the movie, Jumanji: The Next Level, this immersive experience will give fans the ability to take on the forms of its heroes. This includes Dr. Bravestone, Ruby Roundhouse, Professor Oberon and “Mouse” Finbar who are tasked to save Jumanji from a new dark and mysterious villain.

Fans will be enlisted on a daring quest to rescue the Scepter of Se’payu containing the Red Jewel of Jumanji and return it to the temple from which it was stolen. Pulled into the perils of Jumanji, players face challenges just like those that the avatars face in the movie – evading man-eating wildlife, navigating across treacherous landscape, battling evil henchmen – to survive and return to real life.

“Since first collaborating on Ghostbusters™: Dimension, Sony Pictures Virtual Reality has continued to believe in our unique ability to bring stories to life in a fully immersive, social and dynamic way,” said Curtis Hickman, Co-Founder and Chief Creative Officer of The VOID. “Through close collaboration on this project, we have been able to develop a dimension that is more interactive and immersive than any VOID experience has ever been before. Utilizing new technology and more illusion design, Jumanji: Reverse the Curse is a true adventure that travelers will want to experience over and over again.”

Jumanji: Reverse The Curse will be exclusively available at the following VOID locations starting November 27, 2019:

Grand Canal Shoppes in The Venetian and The Palazzo Hotel Las Vegas, Nev.

The Rec Room at Square One, Mississauga, Ont.

tags: jack black jumanji reverse the curse jumanji the next level kevin hart sony pictures the rock the void
previous Ho Ho Ho! It's Time For 'Santa's Visit' In VR
next Angry Birds: Isle of Pigs Will Allow You To Build Your Own Levels
Related Posts