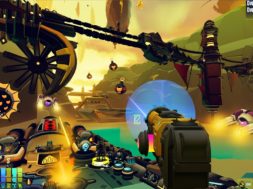 While we sit in anticipation of some terrific upcoming VR games, there’s a great VR title that has drawn our attention. We’d like to introduce you to Bow to Blood: Last Captain Standing by Tribetoy.

In Bow to Blood you will become a captain where you get to fly your ship and command your crew as you try and compete to become Champion in a winner-takes-all reality show. You can see some of the gampeplay footage in the video below by wolftooth.

Players will have to build relationships and plot betrayals to avoid getting voted off the season and become the last captain standing.

As the captain you will stand at the bridge of your futuristic punk-rock airship. You will have to pilot your vessel and fire your great cannons to cause destruction and mayhem on your opponents. You will be occupied with the versatility of the opponents. But to not fear as your ship comes equipped with an array of powerful weapons, each with their own specialty.

You will order your crew between various stations to strategize and customize your ship’s strengths for every situation. When assigned to a station, your crew can use their expertise to push it beyond its normal operating capabilities.

Shields provide an extra layer of protection, the turret gives you another gunner, drone control unleashes powerful automatons that menace your opponents, engines provide a significant speed boost, and sensors highlight valuable items in the world and jam incoming projectiles.

Players will have to command console to route power between ship systems to charge and activate critical abilities, or overcharge a system for a massive short-term boost.

You can pull out your trusty sidearm when things get up close and personal. Repel enemy boarding parties to prevent vital components from being disabled.

AI opponents in Bow to Blood will have their own motivations, objectives, and personalities. You will have to assist your fellow challengers and gain their support, or exploit them for personal gain and earn their enmity. The choice is yours, but players will have to choose wisely – challengers will remember how you have treated them, and in the Arena, grudges die hard.

At the end of each match you’ll need enough friends to avoid getting voted off the season. You will have to make sure someone always has your back, or earn enough points to go it alone.

Randomized encounters and a rotating cast ensure that no two experiences will be the same in Bow to Blood. You can play over and over again to discover new environments, opponents, and challenges. Bow to Blood also offers a ‘hard’ difficulty mode with all new opponents and greater risks if you crave the challenge.

Players will ultimately be completing challenges to gain rewards that fill your private quarters. Bow to Blood: Last Captain Standing is available on the Steam marketplace for $17.99. Its available for both Oculus Rift and HTC Vive players.

It is also available on the PlayStation store for PS VR for $19.99.