Join The PvP Fun In Battle Round 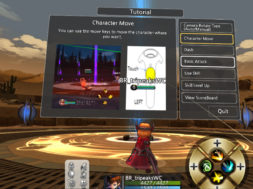 Join The PvP Fun In Battle Round

One of the perks of virtual reality is that we get introduced to a variety of new ideas and content that provide a dose of fun. To add to the slew of fun VR games, Tripeaks has published their new title called Battle Round.

Battle Round is a PvP fighting game where you and your foes go head to head in an arena. You will be able to team up in 2v2 or 5v5 modes to find out who really is the best.

Battle Round will provide more than 30 characters to choose from with their own unique attributes.

“Special Resources of Tuaroon continent, Mana Stone Among the stones, Mana stones are a powerful source of ultimate energy. But all the technicians who refined the stone were massacred. Now the heroes are caught in an endless battle take over the refinery facility left behind.”

Battle Round is a casual game where each match will by around 5 minutes in duration. This allows players to cycle through matches quickly and can hop off in a short amount of time.

Characters will also have a variety of skills and abilities to choose from. You can create unlimited strategies by using unexpected combinations of skills and items.

Battle Round is available on the HTC Vive. Make sure to give it a shot if you are into casual PvP battle arena matches.