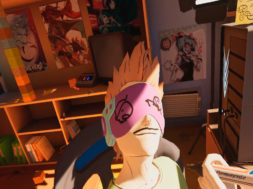 Virtual Hero VR is an immersive and gamified experience which is based around the original Movistar+ TV series called “Virtual Hero.” In partnership with Zeppelin TV, Grupo Planeta, and Snofokk, you will adventure in a story with Rubius who is the main character in the series and experience.

For those unfamiliar with the series, Virtual Hero is a Spanish TV show about Rubius who is in search of the sphere traveling through the Game Worlds to save Sakura, the girl he has just fallen in love with.

In the game you Rubius is one of 100 players who has been selected to try the ORV headset, a new experimental virtual reality service. The ORV HMD is directly connected to your brain’s neural network and will immerse players in a universe.

You will start off in Rubius’ bedroom where you can explore and see everything about him. Then, you will receive an emergency call from him asking for help. Your mission is to go on a quest and save him with some fun, magic, and enthusiasm.

The game itself is quite short with a limited amount of things you can do. But the cool part is that Virtual Hero VR is free for users. So if you own an HTC Vive or Oculus Rift, make sure to give this quick game a go.

tags: movistar rubius sakura virtual hero vr
previous The Spy Who Shrunk Me Gets Full Release Including 2 New Missions
next A New Type Of VR Rhythm Game Called OnShape Is On Its Way
Related Posts