John Wick Chronicles: An Eye For An Eye VR Experience 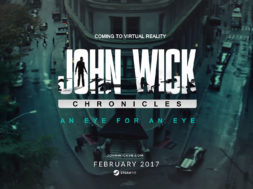 John Wick Chronicles: An Eye For An Eye VR Experience

John Wick has become an action packed franchise starring the legendary actor, Keanu Reeves. Keanu plays a notorious hit man named John Wick who comes out of retirement to seek vengeance against the evil tyrants of the world. In the second movie, John Wick travels to Rome to face off against the “world’s deadliest killers.” The movie is titled John Wick: Chapter 2 and will be in theaters starting February 10, 2017.

Lionsgate, the studio behind the movie franchise, decided to create a VR experience to go along with the upcoming film. So they partnered up with Starbreeze Studios to bring a tremendous VR experience to life called John Wick Chronicles: An Eye for an Eye. In this VR game you’ll be fighting and shooting against your enemies. You must use clues and your acrobatic abilities to take out the assassins. You’ll be introduced to practice areas and stores to fulfill the destiny of John Wick. The VR game will have a total of four levels and take you through crazy sequences with one involving a helicopter shootout.

We noticed that VR shooting games usually wear you out after a short duration of time. So be sure to stretch and get ready to battle enemies in virtual reality. You’ll have to crouch and take cover from time to time. Also, VR games tend to have you move quite rapidly at times. The game will be available on Steam in February 2017. The game will initially be available only for the HTC Vive.