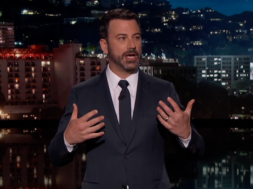 Jimmy Kimmel is notorious for being a jokester on his late night TV show where he releases skits and videos making fun of things that seem a little ridiculous to him. For example, Jimmy took in part of releasing a United Airlines commercial making fun of the event that occurred aboard their flight a couple of weeks ago.

This time, Jimmy Kimmel released a video that poked fun at Facebook’s new social VR application called Spaces. Mark Zuckerberg and company have created an open space where users can login and interact in a social VR environment. People will have the ability to travel to different places around the world together and take part in activities together.

This video does shed light on a particular point about how VR technology is still not there. Facebook users and people using the Space probably won’t be logging in as much as they do like Facebook and Instagram. While it’s an impressive application, there are many more riddles to solve for the mainstream audience to adopt the world of social VR. But Spaces is a great starting point where Facebook can slowly start to update and improve this new idea and application. We’ll be seeing massive improvements in the coming months and years.