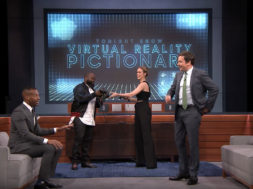 As always, Jimmy started off the segment by demonstrating how the game works. He chose the number 4 from the list which prompted him to draw a picture of a dragonfly in VR using the Tilt Brush application.

While Jimmy tried his best to draw the dragonfly in VR, no one really had a clue as to what he was drawing. After Jimmy was Marlon Wayans turn to draw. He picked the number 5 which prompted him to draw Deviled Eggs. And while Wayans did a good job drawing a depiction of the food, the Roots member was unable to correctly guess the image.

Next up was Brie Larson who chose the number 7 which prompted her to draw Sharknado. Her drawing in VR was enough for Jimmy to quickly guess the word.

To end the competition, the Roots member hopped up to draw the final phrase, which was Hump Day. He was able to draw a camel’s hump and a calendar to depict the phrase. While everyone was throwing out words to him, Jimmy was able to correctly guess the word, which sealed the win for their team.

Virtual Reality Pictionary is definitely an enjoyable segment in Jimmy Fallon’s Tonight Show where we get to see celebrities try out the HTC Vive headset for the first time. Some of the celebrities seem to easily get the swing of things while others have a harder time. But most of the guests that appear in the segment seem to enjoy using VR to play the classic game of Pictionary. Who wouldn’t, right?