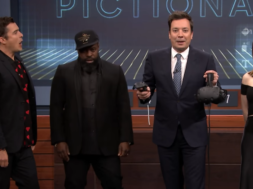 Jimmy Fallon has been hosting his guests on the Tonight Show with a new segment called Virtual Reality Pictionary. This is a game where you must draw pictures using Google Tilt Brush on the HTC Vive. In the past, he’s brought on celebrities such as Scarlett Johansson, Micahel Che, Dove Cameron, and Andrew Rannells. On the most recent airing he brought on Orlando Bloom (who’s promoting his new movie, Pirates of the Caribbean: Dead Man Tell No Tales) and Zoe Lister-Jones (promoting her new movie called Band Aid).

As always, Jimmy Fallon started off the game demonstrating to the other celebrities on how the HTC Vive works. He ended up choosing number three which told him to draw “Pirate’s Booty.” While Jones struggled to grasp the picture for a second, she began to understand what Jimmy was drawing thanks to the 3D platform. Fallon pointed at what appeared to be a butt.

Then Orlando Bloom proceeded to put on the headset and draw a picture of “Sitting Duck.” While putting on the headset, you could see that he’s never used an HTC Vive before. Once he put it on he said, “This is so beautiful, I’m just going to stay here forever.” Bloom seemed to grasp the concept rather quickly and did a fair job in drawing an image of a duck next to a chair. He also managed to use the 3D space to draw in more details to try to portray the phrase to the best of his abilities. And he ended up succeeding.

After, Jones put on the headset and had to draw an image of the phrase, “Piggy Back.” While she didn’t really utilize the 3D space, Fallon managed to guess the image rather quickly.

Tariq, from ‘The Roots’ stepped up to the plate after to draw an image of “Sushi Bar.” While Bloom tried his best, he failed to guess the correct answer. For the final question, Orlando Bloom got up on stage to draw a picture of “Man Bun” but everyone failed to guess the correct answer. So, Jones had to hop up and draw the final image of “Hump Day.” While everyone struggled, Bloom somehow managed to pick the right answer and win for his team.

The game is quite entertaining and we’ll be looking forward to seeing more guests try Virtual Reality Pictionary.