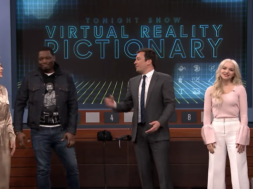 Jimmy Fallon has launched a new segment this year for the Tonight Show called Virtual Reality Pictionary where guests must draw pictures using Google Tilt Brush on the HTC Vive. Teammates then, must guess what pictures they drew in the virtual space.

Jimmy Fallon starts off by choosing one of the numbers listed on the wooden board which instructs him to draw an image of a “clown car.” Dove Cameron then starts guessing what the image is that Jimmy Fallon is drawing in the VR space.

While Jimmy is quite familiar with Tilt Brush, Scarlett and company are quite foreign to the HTC Vive. This can be seen when Scarlett starts drawing an image of the “Pinball Machine” in Tilt Brush. They are mesmerized by how the virtual space works, especially when they show the 3D aspect of virtual reality.

While Jimmy and the guests show an entertaining side to Google Tilt Brush, there are many VR artists today who use the platform to create professional VR artwork. The VR tool allows people to draw detailed and eccentric artwork in an immersive 3D environment. And the space can be quite wide with multiple layers and options to choose from.

The Virtual Reality Pictionary segment on the Tonight Show is definitely entertaining to watch. If you’ve yet to check out the Tilt Brush, definitely give it a gander on one of the VR headsets nearest you.