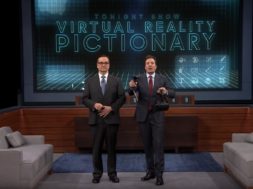 Jimmy Fallon is The Tonight TV Show host on NBC who interviews, interacts and sometimes plays games with celebrities. Last night, accompanied by Andrew Rannells (famous from TV show Girls) and Michael Che (famous from SNL), Jimmy introduced his new game called Virtual Reality Pictionary. In this game, they form into 2 teams and go head to head in a game of pictionary. But they use the Google Tiltbrush as their platform on the HTC Vive.

In the video you’ll see that it’s their first time drawing images on Google Tiltbrush and are intrigued by the way you can draw 3D images. The goal is to draw a recognizable image in 3D space by choosing one of the random numbers planked on the wooden board. The Tonight Show simplified the use of Tiltbrush by only using the painting controller and not the pallet hand. For those unfamiliar to operating an HTC Vive, they do a pretty good job in painting the selected images. And it also demonstrates how easy it is to use for those unfamiliar to VR and specifically the HTC Vive.

NBC has been making strides to incorporate a lot of VR technology into their shows and network. Previously, during the election time, they partnered up with AltspaceVR to deliver news on the VR social platform. We got to witness celebrities such as Al Roker step inside the virtual world and interact with the virtual fans.

Hollywood in particular has been taking a liking to the growing technology and we’ll be seeing more networks incorporating VR to their shows.