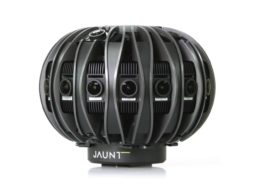 Jaunt Inc. has just made their Jaunt One professional grade VR camera open to the public to public. Complete with new features debuting at NAB, the award-winning camera will be sold through AbelCine, Radiant Images, and The Studio-B&H.

This carefully crafted and designed VR camera was developed by some of the top experts in the industry with professional VR creators in mind.

“Demand for the Jaunt ONE has been unwavering since we introduced it to rental houses last summer, ” said Koji Gardiner, VP of Hardware Engineering at Jaunt. “The natural next step was to provide filmmakers the ability to own the camera. These filmmakers are pushing the creative boundaries as they eagerly explore the medium and we could not be more proud to provide them with the only professional-grade VR camera designed specifically for their craft.”

Key Jaunt ONE features include:

While there are many consumer level 360 VR cameras available, it’s been a hard niche for the professional videographers to find a viable VR camera. Currently, companies like GoPro offer solutions for professional grade equipment with the Odyssey, which runs around $15,000. Odyssey packs 16 synchronized HERO4 Black cameras into an all-in-one rig to capture 360 footage. There’s also MoooVR which uses 5 Canon m3 cameras or the Nokia Ozo which will run you a cool $45,000.

Jaunt One VR camera’s specific pricing will be set by each of the retail partners at AbelCine, Radiant Images, and The Studio-B&H.

The VR & FUN team had the opportunity to speak with many videographers in the industry about a complete package and they’ve always seemed to be rigging up a 360 camera of their own. We are excited to see how the Jaunt One VR camera will make an impact in the industry.