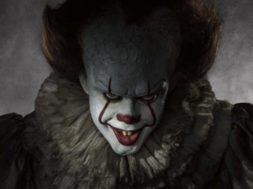 It is an upcoming Warner Bros. horror movie that’s based on Steven King’s famous 1986 novel where children begin to go missing in a small town in Derry, Maine. A band of neighborhood kids come together to investigate the reasons behind the mysterious disappearance. As the kids start to investigate, they uncover that Pennywise, an evil clown whose known for violence and murder is behind the disappearance of the neighborhood kids.

To show the terror that’s being inflicted on the town and the neighborhood kids, Warner Bros. decided to release a VR experience to go along with the movie called IT: Float – A Cinematic VR Experience.

In this VR experience you’ll be entering the sewers of Derry where you’ll be following the floating paper boat. Upon entering the sewers, you’ll be greeted with irky noises and sounds that’ll send chills down the back of your spine, well at least for me. You can hear children’s voices saying, “Don’t fall too” and “I want to go home.” As you get deeper in the sewers, things become a little more intense and you’ll finally get a glimpse of the murderous clown, Pennywise. He’s hiding behind a group of balloons where he’ll tell you something important you need to hear.

The It: Float VR experience was created by Sunnyboy Entertainment who’s created other VR experiences in the past such as Wish Upon: VR Experience.

You can watch It: Float on a mobile VR headset today on Littlstar, Samsung VR, and Jaunt. If you’re into scary stuff, this is right up your alley. For those of you that aren’t good with scary content, this might just be the time to test yourself and face your fears.

I’ve seen scary clowns in the past but Pennywise definitely takes the cake. It, the movie, is set to release on September 8, 2017 nationwide.