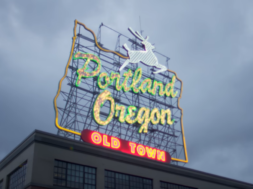 Intel is on the cusp of building the best technology when it comes to computer processing and providing users with top notch performance. Their company is involved in many verticals and various aspects of business including VR. Intel is in the midst of creating their own standalone VR headset and also working with companies such as HTC to bring an untethered solution for the Vive headset.

And with heavy interest in the field of VR, they’ve been quietly scouting out talent all over the nation. And for some reason, Intel seems to have a vested interest in the Portland region. In a recently released YouTube video, Intel documented their thoughts on this particular region and their belief that this place is the next VR gold mine.

Portland has never been the initial hub but a tremendous amount of high quality companies have come out of Portland, I think that’s exactly what’s going to happen in VR.

In their uploaded video, Intel also mentions the following.

“The quirky, cool Pacific Northwest city of Portland, Oregon is an epicenter of a growing community of virtual reality creators, technology experts and consumers. For some, it feels like a VR gold rush in the Silicon Forest as more people move into the city with ambitions to share the future of immersive digital experiences.”

While we’ve rarely heard about any notable VR companies from Portland, Intel seems to have a vested interest in the region. What are your takes and thoughts about Portland and Intel stating that this place feels like a “VR gold rush?”