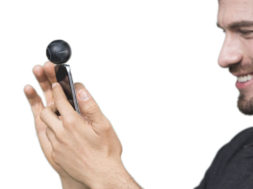 360 cameras are becoming a big hit these days as more and more camera companies adopt the new technology. From Samsung to Nikon to every other major camera company, they are envisioning the future with this new method of capturing the moment. You’ll no longer have to take linear photographs or videos. Nay, you now have the ability to take pictures that capture the life of the whole room. And Insta360 looks to push the bar up a new notch in this new emerging sector.

This innovative company based out of Shenzhen, China is trying to launch a clip-on 360 video camera called Insta360 Air for Android devices. With the simple use of the Micro USB you’ll be able to capture any moment on the go. Below are the listed Specs.

Livestreaming: On any 360 platform including YouTube, Insta360 server via link sharing

Warranty: One year for camera, one month for accessories, special terms applied to certain regions with specific local regulations

Currently, Insta360 is looking to get this product funded through IndieGoGo where you can purchase the camera for $99. Early adopters will be getting a discount with the whole bundle being valued at $166. The 360 cameras will come in an array of colors such as Black, Rose Pink, Silver White and Rich Gold. Insta 360 hopes with this new camera that consumers will have an easier time sharing and livestreaming 360 videos on the go. They have made a goal to have these cameras shipped by February 20th next year for the early backers.