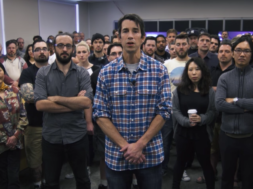 Insomniac has built notoriety for creating many hit titles throughout recent time with games such as Spyro the Dragon, Ratchet and Clank, and Edge of Nowhere (VR game). The company has created a foundation for people to experience joy and a sense of adventure through their storytelling. And Insomniac CEO, Ted Price, believes that the company would’ve never achieved this level of success without his international team members located in their California and North Carolina offices. Insomniac staffs over two hundred employees.

Currently, companies around the nation are facing a dilemma with Trump’s recent restrictions on certain Muslim countries from entering the United States. Ted Price addressed this issue by releasing a video on YouTube on how he believes this to be wrong.

“We at Insomniac games stand united in strongly opposing President Trump’s immigration ban. There’s no question that these orders will harm us as a company and many of our team members. So we ask, is this the American way?”

Many other companies in the tech industry are starting to band together to oppose President Trump’s recent executive orders. Towards the end of the video, Price urges people watching this video to do something about the recent actions taken by President Trump. There will be further updates to this story.