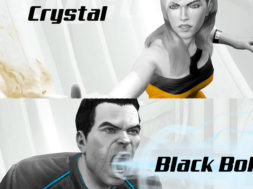 Marvel has added two new superheroes to the upcoming Marvel VR game, Marvel Powers United VR. Inhumans Black Bolt and Crystal will be joining the team with their unique abilities in taking down the evil forces.

For people unfamiliar with the comics and movie, Inhumans are altered humans beings that were the result of experiments on ancient humans by the extraterrestrial race, the Kree. They embedded their own genetic code to transform and acquire superhuman abilities through a process known as Terrigenesis.

The Inhumans were once led by a group called the Unspoken. They were later dethroned by the current inhuman king, Black Bolt. The Inhuman royal family, consists of Medusa, Karnak, Gorgon, Triton, Crystal, Maximus the Mad, and the canine Lockjaw. Both Crystal and Medusa have been members of Fantastic Four. Crystal has even been a member of the Avengers.

Crystal (Crystallia Amaquelin Maximoff) on the other hand has the abilities of controlling all four-elements, kind of like the last air-bender. Crystal can animate and manipulate earth, air, fire, and water individually or in various combinations. She is also in top physical condition due to her Inhuman physiology. But she is vulnerable to pollutants.

Currently, there are five other characters revealed in the upcoming Marvel Powers United VR game. They include Deadpool, Captain Marvel, The Incredible Hulk, Rocket Raccoon, and Ronan the Accuser. The addition of Crystal and Black Bolt makes it seven in total. There is still no word on exactly when the game will be released for the Oculus Rift. All we know so far is that it’ll be arriving some time this holiday season.