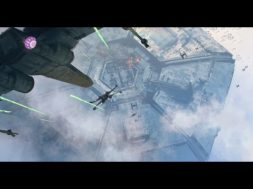 Star Wars: Rogue One had some of the most visually striking VFX shots throughout the movie where we witnessed compelling angles to throttle the story. Directed by Gareth Edwards, the visual genius behind films such as Monsters and Godzilla, Rogue One accumulated over $1 billion at the box office. Gareth Edwards had grand visions for this franchise movie that required creative and well-maneuvered shots. In order to achieve his vision, the director partnered up with a VFX studio called Industrial Light And Magic.

Industrial Light And Magic understood Gareth Edward’s grand vision and his “hands-on” approach when it comes to filming. To compliment Edwards unique style and approach, the VFX studio came up with a plan using Steam’s VR tracking system. In a recent interview with BBC Click, computer graphics supervisor, Steve Ellis, states, “He’s (Gareth Edwards) a very hands on film maker. He likes to walk around his sets and physically pick up the cameras himself and walk around find interesting angles that might not have occurred to him when he was planning out his shoots back in pre-production. Our visual effects adviser John Knoll was really keen that he be able to sort of apply that same style of filming to the synthetic cameras. So we used a real-time virtual reality system so that he can show us rather than trying to explain to us.”

This neat gizmo that Steve Ellis explains is called the “VCam Renderer.” Industrial Light And Magic VFX Studio came up with a contraption where a Vive controller is strapped behind a tablet like computer to position the camera in the virtual world. This allowed Edwards to show to the team how he wanted a certain VFX shot and angle. “He was able to sort of show to us that ‘beginning of the shot I want it here, end of the shot I want it here.'” said, Ellis. “We can then publish this through our pipeline software and then it can be immediately picked up by animators… We shot this with Gareth in London. We then pushed it into our pipeline, then picked up by people in San Francisco and a tape was ready for him to review the next morning.”

In the video, you can clearly tell how Edwards took advantage of  Valve’s amazing VR Lighthouse tracking system to find enticing angles for Rogue One. It’s especially inherent at the scene where the X-wings drop down to the planet through the opening that was recently created. It has a special rotational angle that captures the excitement and dangers of traversing through a small opening while enemies are blasting away at you in space.

Star Wars: Rogue One has been nominated by Academy Awards and other various organizations for best visual effects. VR is becoming a powerful and vital tool for Hollywood and VFX studios as it provides new structures to film making and storytelling in the modern era. There will be a lot more instances where similar VR tools will be used to create Blockbuster hits like Rogue One.