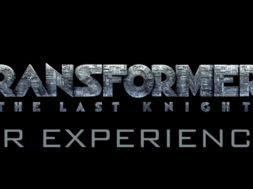 IMAX has recently expanded their VR experience centre to New York for people to try out amazing VR titles on the east coast. And one of the featured VR games available to demo today is Transformers: The Last Knight VR Experience. For a limited time, IMAX has made this title available for free to play at their LA and NY locations.

In Transformers: The Last Knight VR Experience you’ll be joining the Autobots to face off against the Decepticons in an explosive showdown. You’ll be pitted against the likes of Megatron and other notable villains from the Transformers universe while fighting alongside Optimus Prime, Bumblebee, and Hound. Your mission will be to recover a powerful weapon from the Decepticons.

In the trailer video, you can see that you’ll be aboard some sort of vehicle where the Autobots and Decepticons surround you. From there, users will have to engage and attack the transformers with what appears to be machine guns that you can dual wield. The experience also looks to be stationary where you won’t be needing to move around at all.

Transformers: The Last Knight VR Experience was created in collaboration between Paramount Pictures, Hasbro, and ILMxLAB with Executive Producer, Michael Bay, being involved in the project.