I Expect You To Die: Seat of Power Is Now Available 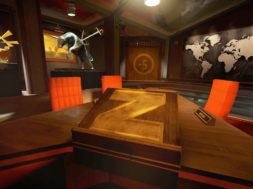 I Expect You To Die: Seat of Power Is Now Available

VR Spy game I Expect You To Die has come out with a brand new DLC and level called “Seat of Power.”

Created by Schell Games, Secret agents are placed in Dr. Zor’s boardroom in the “Seat of Power” content update, challenging players to put their espionage skills to the ultimate test. With a mission to retrieve Dr. Zor’s secret information and safely escape, players must covertly navigate through the immersive environment without triggering any suspicion and come away unscathed.

In the trailer you can see the signature sound, look, and feel of the original game. For those unfamiliar with the game, I Expect You To Die is a virtual reality puzzle game where players take on the role of an elite secret agent. Schell Games has stated that the game thus far has generated over $3 million in revenue which is an impressive feat in the VR community.

You will begin by being placed at the head of the table in Dr. Zor’s boardroom, challenged to retrieve information and solve a series of puzzles to escape safely and avoid death.

A great thing about I Expect You To Die: Seat of Power DLC is that its available for free (for those who own already own the game).

You can download the game on the Oculus Rift, HTC Vive, and Playstation VR today. The DLC is a brand new level that should bring back the authentic feel of I Expect You To Die.

tags: i expect you to die seat of power vr spy game
previous SDCC 2019 - Doctor Who: The Edge Of Time TARDIS Coming To VR
next Get Ready To Become Iron Man In VR - Here Are The Big Updates
Related Posts