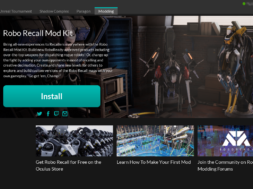 Many VR enthusiasts are currently playing Robo Recall to test what this game is all about. And through a little bit of game play, you notice that you have to teleport to get around in the game. It currently doesn’t support locomotion. While this might be problematic for some, it ultimately gets the job done in moving from point A to point B. Epic Games designed Robo Recall behind the idea of using 2 sensors for the Oculus Rift.

Traditionally, you get one sensor from the original Oculus Rift bundle and another sensor from purchasing the Touch controller, which is required to play the game. So for people using 3 sensors, teleporting around can get a little bit tricky. The game was intended to track ‘Front-facing’ mode rather than 360 movement and teleportation. So when you teleport to somewhere you’re looking away from, you can end up facing the opposite direction. This is due to the game recognizing where the front sensors are located.

To dispel this design, Huge Robot released a mod to help 360 setups and teleportation mechanics. In a reddit post they described the functionalities and installation guide for the custom mod.

The standard behaviour has forward teleport point the forward of the room towards that direction – which is great if you’re facing forwards, but terribly confusing when you’re facing any other way.

Download and double click on the .robo file to run the mod installer. Launch game and go to the holographic platform. Load up the Teleport360 mod and then load a mod level.

Unfortunately, mods don’t seem to work in the main game at this time.

One thing to note is that you can’t get any stars, nor EXP for missions accomplished when using this mod. The leader boards will also become deactivated. Here’s the link to downloading the mod by Huge Robot.