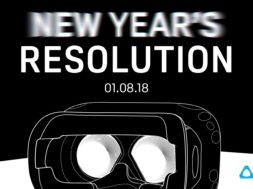 HTC Vive is certainly one of the premiere VR headsets in today’s market. Using their impressive HMD technology along with the lighthouse sensors, they provide a glorious experience for anyone who wants to check out VR games. At CES 2018, HTC looks to announce some important updates about their headset where we might see an upgrade to their displays and resolution on the Vive.

On their official Twitter page they shared a new image that reads “New Year’ Resolution” pointing towards a certain visual upgrade on the Vive headset. Currently, the headset contains two 1080 x 1200 panels and we might be seeing an upgrade to that for an enhanced experience.

The HTC Vive Press Conference will be held on January 8, 2018 in Las Vegas prior to the official CES convention so we will probably see the big announcement then. We might also see some exciting news around their standalone VR headset. What are your thoughts about a possible upgrade to the display? Make sure to check back for further updates.