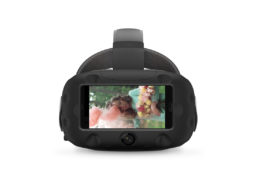 HTC has released one of the most accomplished VR headsets in history with their Vive headset. And they look to follow up on the amazing device with a mobile version according to CNET. HTC plans on manufacturing an advanced mobile VR headset where it’s compatible with the newly announced U Ultra smartphone.

In the recent interview, Chia-lin Chang, President of Global Sales has stated that the mobile VR headset they’ll be manufacturing will be more advanced than a simple headset like the Samsung Gear VR. “Vive is very top end, and in the coming months you’ll see our plans in terms of mobility and VR, and it’s not a phone slapped onto a headset,” he said. “It’d be a different thing.”

HTC used to be primarily focused on smart phones and mobile devices. But with the recent surge and interest in the next generation platform, the company has devoted a lot of its resources into their VR division. While the company is operating at a loss (for now), HTC will continue to harvest wisdom from their experience with virtual reality technology.

“We have learned much from our entrance into the world of virtual reality,” Wang said, “and we believe our focused approach to building the ecosystem is the right strategy to enable the whole industry to expand through the creation of compelling content and rich experiences.”

Chia-Lin Chang has stated that their mobile VR headset will be released some time later this year. Many VR advocates today would vote the HTC Vive as the best PC-based VR headset over the Oculus Rift. We’ll see if that’ll be the same case with their upcoming Mobile VR headset where it’ll be competing against the likes of Google Daydream and Samsung Gear VR. Both of those companies have big aspirations for their mobile VR division as they look to become the leaders in that specific vertical and industry.