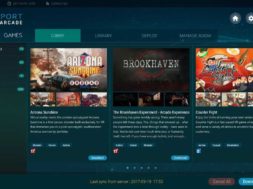 HTC has announced that they will be celebrating the one-year anniversary of Viveport (their global app store) by offering 100% developer revenue share beginning October 1st – December 31, 2017. Developers will be able to keep all revenue made on every Viveport platform.

“From launching the first-ever subscription model for a VR app store to exceeding 1,000 titles available globally, to over 26,000 registered developers in our community, Viveport has grown by leaps and bounds over the past year.” said Rikard Steiber, President of Viveport. “We enter year two with exciting new features and improvements to continue our commitment to providing the best VR experience for Viveport customers and the most monetization options for developers.”

HTC will also be launching an open beta to their Viveport Arcade Manager program. The Viveport Arcade software platform is HTC Vive’s proprietary content management and distribution platform for developers and operators looking to introduce out-of-home VR experiences to the public, such as VR arcades or entertainment destinations.

The comprehensive software solution provides both a front-end consumer interface and a backend that tracks usage data, manages sales and offers a secure billing solution for developers and operators. Developer revenue share for Viveport Arcade Manager will increase from 50% to 70% in addition to all developers receiving all profits during the holidays.

In addition, HTC has also announced the early release of the Viveport Scene SDK. This is a new toolset that’ll help develoeprs create immersive VR previews to showcase in Viveport. The Viveport Scene SDK allows developers to engage customers with their content prior to purchase or rental. Features include:

“Our research has shown that customers vastly prefer VR previews over screenshots and videos to inform their purchasing decision,” said Drew Bamford, Corporate Vice President of HTC Vive’s Creative Labs. “We are thrilled that the Viveport Scene SDK will provide developers with a new avenue for discoverability and engagement on the Viveport store.”

HTC looks to go full-steam ahead with these new features and add-ons for their growing app store, Viveport.