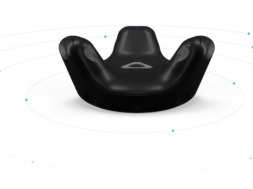 During MWC 2017, HTC has announced that the Vive Tracker will be available to order for developers on March 27th. For those unfamiliar with the product, it’s a peripheral sensor that allows objects to be tracked in the virtual world. For instance, you can have it strapped to baseball bats, gloves, guitars, guns, and more. This will allow those objects to be represented in the virtual world.

It’s currently a peripheral with a lot of potential. The Vive Tracker is a fairly new device that needs to be integrated, thus the release to developers on March 27th. The peripheral by HTC will be released later on in the year for consumers.

As far as the Deluxe Audio Strap goes, HTC has announced that it’ll be available for pre-order starting May 2nd for $99.99. Deliveries will be made around June. This specific peripheral will come with an integrated headphone for the Vive headset. Currently, Vive users must put on their own pair of headphones but with this launch, they’ll have easy integrated access to audio.

The price seems reasonable enough for consumers to try as it’ll greatly enhance the virtual experience using the Vive VR headset. With an integrated peripheral such as the Vive Tracker, it’ll be fun to bring in household items to virtual reality.