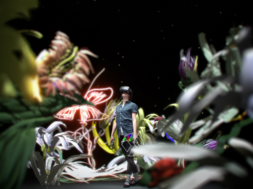 HTC Vive has announced that they’ll be partnering up with the Royal Academy of Arts to present From Life, a special exhibition project that will take place across two distinct spaces: the Sackler Wing of Galleries and the Tennant Gallery. From Life will examine what making art from life has meant to artists throughout history and how the practice is evolving as technology opens up new ways of creating and visualising artwork.

Beginning with a display of historic paintings and works on paper drawn from the RA Collection, From Life will explore the practice of life drawing, from the origins of the Royal Academy in the 18th century to the present day, whilst also looking to the future. Historic paintings by artists such as Johann Zoffany will be followed by works in a diverse range of media by contemporary artists, including Jeremy Deller’s Iggy Pop Life Class (2016), Cai Guo-Qiang’s film One Thousand Youngsters Drawing David (2010) and Jenny Saville’s Entry (2004).

From Life will also present work by Royal Academicians who continue to interrogate the practice of working from life, among them Antony Gormley, Chantal Joffe, Michael Landy and Gillian Wearing.

From Life will reveal the creative process in making these new artworks, as well as opening up the exciting potential of future artistic applications of virtual and augmented reality. HTC Vive is supporting the development of these works and Google Arts and Culture is working with artist Jonathan Yeo to create the first physical free-standing sculpture in metal made by using Tilt Brush.

“This is an experimental project that explores everything from artistic process to technological evolution and creative collaboration,” said Tim Marlow, Artistic Director of the Royal Academy of Arts. “In a sense, From Life embodies what an artist-run academy was, is and might become.“

The Royal Academy will be working with immersive content studio Factory 42, which has been commissioned by Sky Arts and Google Arts and Culture to create Virtual Reality experiences looking at individual artists’ practice.

Sky Arts has also commissioned Factory 42 to produce a documentary entitled Virtual Reality: Mystery of Creativity, which explores creating art in a virtual environment and how artists use these cutting-edge technologies to explore the limits of traditional artistic methods.

Factory 42 will also create virtual experiences based on each artist’s creative process and their output. There will also be a series of short films across the Royal Academy’s online platforms, as well as via the Sky VR and Google Arts & Culture apps. HTC Vive has stated that the displayed works will be published on Viveport.

The exhibit will be open to the public starting on December 11, 2017 through March 11, 2018 from 10AM – 6PM daily. You can grab a ticket from The Royal Academy Of Arts main website.