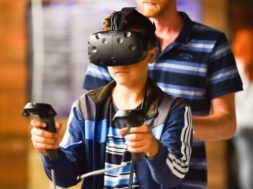 HTC Vive has been releasing a lot of updates and announcements in regards to their upcoming VR headsets including the Vive Pro and the Vive Focus. However, their customer service side seems to be under scrutiny as more customers are getting upset about how they are being treated.

According to a German YouTuber named Sebastian, he recently faced poor customer service from the HTC team where he couldn’t seem to get his 2 month old Vive headset repaired or even get it back without paying a fee. The damage was caused by sweat going into the display of the headset.

“I had played Sprint Vector and sweated into the device,” said Sebastian. “Vive.com service chat people told me to send it in and told me I would get it back repaired after 5 days. I was happy. But that changed. 3 days later I got an email from HTC. They had found liquid damage which they say is not under warranty. I should pay 204 €uros to get it repaired or 45 €uros if I wanted it back unrepaired! So basically, they held my Vive hostage!”

So he created a post on the /r/vive community to talk about his situation and how he’s trying to find other customers that might have faced the similar results. Surprisingly, there were dozens of Vive users who have also received poor customer service from the Vive team.

“I tried to contact support every day for 2 weeks,” said ShadowCVL on Reddit. “Phone support was literally nonexistent, as in when you called and told them it was a vive they told you to use the chat. The chat was inexplicably always broken.

So I set the vive aside for a few weeks and tried again. The paper fix didn’t work for long and soon I was back to it being messed up. I finally got to chat with someone 6 weeks after I received a broken device. I told them of the problem and they immediately closed the chat. So 2 days later I finally got another chat session l, told them of the problem (that I just needed to RMA the cable and I would gladly ship the broken one back).

They told me it would be $60 to ship the new cable. I lost it at that point and told them how their warranty was written to which the agent finally relented and said they would ship a new cable after they received mine, but that I had to ship it at my cost. So I sent it fedex next day air with the RMA number all over the outside and inside of the box. They received it and my RMA sat, and sat, and sat. 2 weeks after they received it and no update.”

As a result, Sebastian is looking to take legal action against HTC through the government consumer protection agency to try and stop their ways.

However, some users are claiming that Sebastian used the wrong cushion that doesn’t absorb liquid. As a result, his Vive headset should not be covered under warranty caused by 3rd party unauthorized accessories.

“In this video I noticed you are using the pu leather VRCover cushion,” said shoneysbreakfast. “This cushion does not absorb sweat or breathe the way that the stock one does and I believe that it increases the likelihood of sweat beading up and rolling into the HMD.

HTC’s customer service needs to get better but their warranty does not cover damage caused by 3rd party unauthorized accessories. I don’t think you have a case there. As far as the 45€, is that just return shipping? If so that sucks but it isn’t unheard of for companies to charge a fee for that and I don’t know if you have a case there either.”

Other users are claiming that he is misleading since he didn’t mention to his lawyer about the third party accessory. “I’d just like to remind everyone that /u/daydreamdist is intentionally being misleading about how he broke his Vive,” said NoctiferPrime.

“He wasn’t using it as intended, he modified it with a VR cover that wasn’t absorbent. Every time someone has asked him about it in the posts he keeps making on the subject, he dodges and doesn’t answer the question.”

Some people even exclaimed that they’ve received great customer service from HTC. “I got the run around with the live chat, posted on Vive’s FB,” said Bmanny. “They had a new headset at my house 3 days later with a prepaid package to return mine. No waiting for repairs or anything, just a brand new hmd. I was blown away.”

If you are a HTC Vive owner, leave us your thoughts on HTC’s customer service.