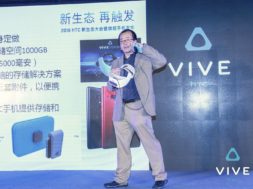 HTC Corporation has announced some brand new updates for the Vive Focus headset at this years Vive Ecosystem Conference (VEC 2018). During the event, HTC highlighted some new functionalities for the Vive Focus standalone headset which includes the System Update 2.0 that will allow you to take phones calls through the HMD.

HTC is still a prominent smartphone manufacturer and with the inclusion of the headset, they combine to tilt the current platform. “Vive Focus users are now able to receive messages, social notifications and take calls on their HTC smartphones without taking off their headset,” said the HTC team in a statement.

“This allows users to stay in touch with the outside world while immersed in VR. By updating its built-in Vive companion app, HTC U12+ users will be able to explore the first-hand experience of those integrated features, and the upgraded Vive companion app will be available in both HTC official app store and Tencent app store shortly, for all users to enable their HTC smartphones to connect with Vive Focus and PC based Vive devices.”

In addition, the System Update 2.0 will allow users to stream PC VR content from Viveport and Steam through the 5GHz Wi-Fi network. “This is enabled by an optimized version of the Riftcat VRidge application that takes advantage of the higher resolution and refresh rate of the Vive Focus which can be downloaded on the Viveport M store today,” said the team.

“VEC2018 marks the beginning of a new chapter for HTC as we combine our heritage of innovation in the mobile sector with our industry leadership in the VR/AR field.” said Alvin Wang Graylin, China President, HTC. “The breadth and depth of innovation demonstrated here today is a clear sign of our commitment to the industry and our many partners in building a new ecosystem around the Vive Reality pillars of VR, AR, AI and 5G. The new capabilities and experiences highlighted in the event today are solving some of the biggest concerns in the market about the VR/AR industry marking a clear step forward to increasing adoption to the masses.”

We look forward to checking out the new revamped Vive Focus. The standalone HMD is not publicly available to the western markets yet.