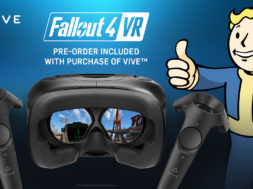 HTC has announced that starting today, with a purchase of a Vive headset, you will receive a free copy of Fallout 4 VR which is set to release December 12, 2017. HTC has recently dropped their prices down to $599 which makes it far more appealing than its original price. You’re also saving $59.99 by receiving a free redemption code to the game.

“Fallout 4 VR is the most anticipated title for VR this holiday, and the game development team at Bethesda Game Studios is delivering on the promise with a full-length AAA open-world game that takes advantage of Vive’s incredible room-scale immersion for a mind-blowing experience in the Wasteland,” said Joel Breton, GM of Vive Studios.

“The promise of a game with near endless content, including hundreds of locations, characters, and quests, fully playable in VR, is something that we have been focused on providing for the VR gaming community. We are now thrilled to provide this incredible game to new Vive owners and eagerly look forward to game’s launch on Vive this December.”

Fallout 4 VR has been a beloved franchise game for Bethesda so it’s quite exciting to see it coming to the VR spectrum where users will be given the freedom to roam the nuclear wasteland. Taking place in the aftermath of a nuclear fallout, you will be traveling with your companion dog to find survivors. If you’ve never played the game before than this will surely be a treat for you once it releases on December 12th.