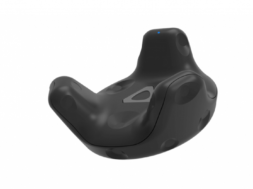 At CES 2017, HTC has announced a new gadget called the the Vive Tracker. With the use of the tracker, simple and ordinary objects can be tracked in the VR world with the use of Vive’s “lighthouse” tracking system. They’ve announced that the new tracker will start shipping in Q2 this year. They have yet to release any pricing on the new tracker but has been quoted saying that it’ll be announced closer to date.

Many developers showcased and demonstrated how people can utilize the Tracker in many ways. Some attached the device to objects such as baseball bats, machine guns (obviously fake), and wireless devices at the HTC press room. The Vive Tracker is the first of its kind among the large competitors and hopes more users come to adapt the future device.

The Vive Tracker measures 10 cm in length and contains enough battery power to last 6 hours continuously. The device resembles the the Vive headset as far as aesthetics goes and boasts the same color as well. The divots on the device also give it an eye-popping look that’s quite attractive. There are many objects that players would love to interact with in the virtual world. Now they have an outlet do so with the addition of the Vive Tracker.