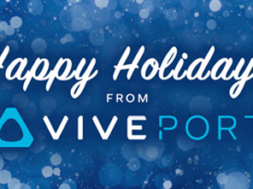 HTC has just released their holiday bundle with the release of ‘Best of Viveport Bundle‘ which includes many terrific VR games. In the bundle there are 8 game included.

Arcade Artist is an exploration game for the Vive which allows you to explore and color fill the world with imaginative creations. The game is currently included in the bundle listed at ($4.99). The downfall about this particular game is the bad reviews.

We did a thorough review of Firebird – La Peri this year and it was quite a joy. In combination of art, story telling, and the music, you get encapsulated in a world filled with expression and beauty.

Kodon By TenkLabs allows you to virtually sculpt and create whatever you dream of in VR. You can create and save these objects as .obj files and import/export the projects.

This VR title allows you to build machines and gadgets in the VR world where they can be flung, created, and destroyed with a worry in the world. Objects can be stretched, twisted, and morphed to create something unique.

Soundstage is a VR music sandbox that was built for room-scale VR. In the VR simulation you can create original beats and sounds that can expand your realm of music. Twirl and connect VSTs and machines with lights.

VR minigolf allows you to putt in some of the most adventurous sceneries invented in VR. From the mountainous settings to the lushest of the greens, you’ll be able to putt away in this mini VR game.

Get a feel for what Mars might be like with Mars Odyssey on the HTC Vive. You’ll be able to travel  in style to the foreign planet and build equipments to fulfill your mission.

World of Diving allows you to go underwater and explore the depths of the sea. In this VR game you’ll be able to customize your avatar and salvage ancient treasures that await you.