“Digital Trends wrote a report last week which dove into third-party Amazon data to show a steep drop in VIVE sales.  This has been the case of most of the dread and panic pervading the internet about VR. It’s also not the whole story,” said HTC on their blog post.

“There’s a reason for this decline. VIVE has paced at its highest sales velocity of all time, for weeks on end, and we sold out. For a consumer electronic product in its third calendar year, this continued trajectory is nearly unheard of. Don’t worry, though: we are ramping up production of the original VIVE and units will continue to roll out to online and retail over the coming weeks.”

HTC went on to share data collected by International Data Corporation (IDC) on the revenue market share for Q1 of 2018. 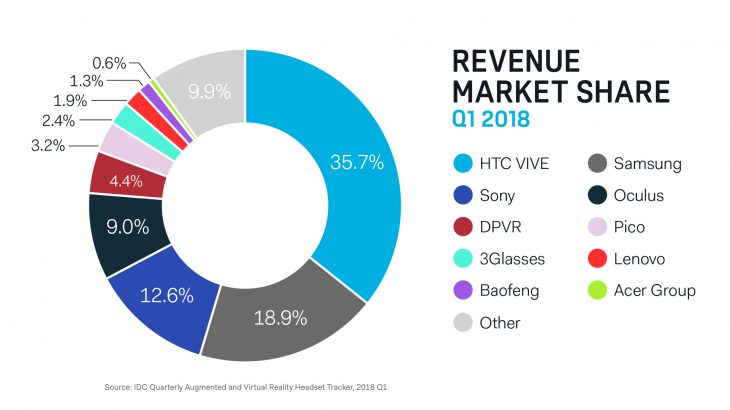 “That is why we’re happy to see intelligence firms like International Data Corporation (IDC) get it right. They analyzed VR revenue share and show VIVE as the leader in the space, which means our investments are paying off for consumers and businesses. It means customers have more to do with their VR headsets and it means businesses see a path toward earning money themselves. It’s exactly where we want to be.”

According to the collected analytics, HTC Vive owned 35.7% share of the revenue market in VR headsets in Q1 of 2018. Second was Samsung with Oculus lagging behind.

HTC went on to state that “VIVE offers the best in premium VR, whether PC-based or Stand-alone.” They also shared numbers in the Chinese market where the Vive Focus leads the way in the Standalone headsets category. 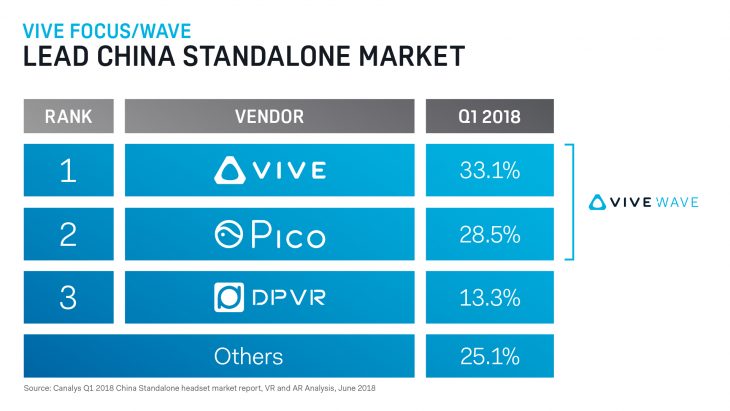 This report was generated by Canalys for Q1 of 2018. What are your thoughts about the HTC Vive compared to other competitors such as the Oculus Rift?