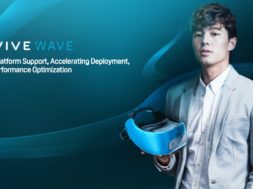 During the Vive Developer Conference in Beijing, China, the HTC team introduced a new VR open platform called the Vive Wave. This is a new platform and toolset that will “enable easy mobile VR content development and high-performance device opimization for third part partners,” according to the team.

“The Vive Wave VR SDK offers an open interface that enables interoperability between numerous mobile VR headsets and accessories, with Viveport as the content platform for compatible devices,” said the Vive team in their press release. “This allows VR content developers to more efficiently and attentively develop content while offering them a much broader reach of potential customers across multiple vendors. Meanwhile, hardware partners are able to focus on true device innovation versus fundamental VR optimization, with access to much needed quality VR content through the Viveport platform.”

“We’re delighted that the Vive Wave VR open platform is receiving such strong industry support from both hardware partners and developers,” said Alvin Wang Graylin, China Regional President of Vive, HTC. “As the VR industry leader in China, it is our duty to help reduce market fragmentation and provide content developers with more ways to make money. Vive Wave will assure a higher consistency in the user experience on a variety of mobile VR devices across various price points, making quality VR more accessible to the mass market. What’s more, with the new Vive Focus, we are excited to bring high quality 6DoF VR experiences, which were previously only available on tethered devices, in a more convenient and portable form factor.”

People who are interested in the Vive Wave program can directly apply online at Vive’s developer portal. Vive will select developers based on the quality of submitted applications.