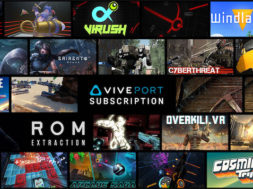 Around two months ago, HTC launched the first ever subscription service for virtual reality with Viveport. They’ve created a service where Vive users can pick and choose 5 different VR titles for $6.99 a month. Today, HTC has announced that they’ll be doubling their library of content for the Viveport subscribers.

Operating in more than 30 different countries, Viveport subscription will now include more than 150 unique VR titles. Additionally, US and UK users will see two dozen popular VR titles from Asian developers who until now haven’t had distribution in the west.
“With Viveport Subscription, we want to give customers an easy and affordable way to experience more amazing VR content for a low monthly fee,” said Rikard Steiber, President of Viveport at HTC Vive. “We are doubling the number of available titles to over 150 with new bestsellers and a wide range of content available in the West for the first time. We want to offer VR developers the most ways to monetize their content, and they now have an additional channel to reach new audiences and generate more revenue.”

Viveport subscribers had access to hit VR titles such as theBlu, Tilt Brush, MakeVR, Everest VR, and more prior to today. With the new overhaul, we’ll be seeing games such as ROM: Extraction, Knockout League, Overkill, Cosmic Trip and Sairento VR included in the subscription package.

Currently, HTC is offering new customers a free, no-obligation trial for the Viveport Subscription service. Make sure to check it out today.