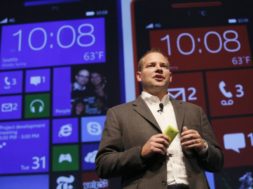 HTC has recently lost its VP of Design, Claude Zellweger to Google in their conquest to dominate the VR market. Now, the company is yet again losing a key figure in the company. It has been announced on twitter that Jason Mackenize, Global Executive Vice President of HTC, is leaving the company.

After 12 amazing years, today is my last day @htc. It was a great run & I feel blessed. Thank you Peter Chou, @cherwang, & TeamHTC.

Jason Mackenzie has been with the company since 2005, overseeing much of the company for the past twelve years. Prior to his role at HTC, Mackenzie was serving as Vice President of T-Mobile USA. He overlooked many components to the company such as the VR sector. But Mackenzie’s main focus at HTC was the smart phone division. He has made a public post on Linkedin about his departure from the company.

“After almost 12 years, it’s time to say good-bye to HTC. To say that I enjoyed my time at HTC is a massive understatement. HTC was family and I loved the challenges and opportunity to work on so many cool products and partner (and learn from) so many great customers. Thank you to Peter Chou and Cher Wang for the opportunity, confidence and support over the years. But most important, thank you to all the great people I had the pleasure to work alongside and lead at HTC…your passion and commitment was second to none and I am honored to call so many of you friends.”

Mackenzie hasn’t announced any decisions on where he’ll be going next. HTC has yet to make a public announcement about this particular situation.