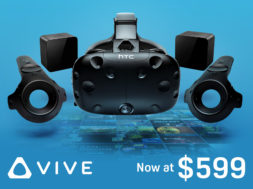 HTC has just announced the price drop of their Vive VR headset to $599 which is $200 off original price. Starting today, August 21st, customers will be able to purchase it at this new price in addition to a free trial of Viveport subscription.

This is a bold step for the Vive team as their price becomes a lot more competitive against the Oculus Rift. Vive is currently one of the leaders in the VR industry providing consumers with a high-end option for a PC powered VR headset.

“Our goal at Vive has always been to offer the best and most advanced VR system and drive mass market adoption for VR across the globe,” said Cher Wang, Chairwoman, HTC. “We’re continuing to deliver on that commitment with this new price for Vive, making VR more accessible to a broader audience and driving the entire VR industry forward. Vive’s game-changing technology, best-in-class content and unmatched global partners are fulfilling the promise of VR like never before. With highly anticipated titles, and the upcoming launch of Vive Tracker, there has never been a better time to embrace Vive, and enjoy the most immersive VR experience available.”

According to Steam statistics, HTC Vive maintains a 60% share of access to the Steam platform for high-end VR headsets.  Over the past year, Vive has maintained its lead by more than 20%.

HTC is working with many studios today to release more AAA content onto their platform including Bethesda with Fallout 4 VR, Doom VFR, and more.

“We’ve rapidly diversified the Vive business so that when customers and businesses purchase Vive, they know they’ll benefit from a wide base of support for years to come,” said Dan O’Brien, GM US, HTC Vive. “From constant improvements to the core Vive hardware to the industry’s first VR subscription service, to investments in new technology for developers, Vive is at the forefront of the push to take VR to the mainstream.”

They’ve also partnered up with companies such as Google which is set to release a standalone VR headset during the upcoming holiday season. In addition, HTC is working on peripheral devices such as their new Tracker to help track objects in virtual reality.

A lot of people have been wondering when this price cut will happen and it seems like the time is now. If you’re one of the people who’s been waiting on purchasing an HTC Vive, the best time might be now. Happy hunting!