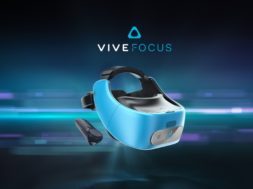 HTC has just announced that the Vive Focus standalone headset will be coming to the international markets later this year. When it was first announced, the Focus was solely exclusive to the China region. Now, fans all over the world will have a chance to experience this 6DoF headset in person.

When the Vive Focus was first introduced to the Chinese marketplace, it was launched at a price point of around $600 with the special white version at around $650. Some of the cool specs about the HTC Vive Focus is that it includes a 3K AMOLED display at 2880 x 1600 which is fantastic for a standalone tetherless HMD.

In addition, HTC has announced that developers who bring content to Viveport in China for either Vive Focus or PC-based Vive, will receive 100% rev-share from title sales and Viveport subscription in China between April and September 2018. HTC is focused on making Viveport the best platform for VR developers, and this rev-share opportunity is just another way in which they are empowering developers to create the best VR content.