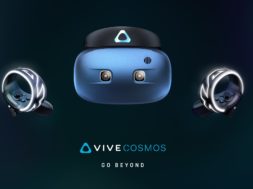 During CES 2019, HTC announced that they will be releasing another new VR headset called the Vive Cosmos. This new headset looks to be a mobile HMD and similar in style to the HTC Focus which provided users with an untethered 6DoF experience.

The company states that the COSMOS will allow you to “enjoy VR at home or on-the-go.” HTC has yet to provide any specs behind the new Cosmos headset. There is also not a price point or release date.

We’d like to give you a first look at VIVE COSMOS, the newest VR headset from VIVE. #HTCVIVECOSMOS #HTCVIVE #VIVEPORT pic.twitter.com/oP00jXoevU

But an interesting component in this picture are the controllers which look quite similar to the Oculus controller. They have a circular ring for tracking with an analogue stick and buttons at the bottom area. There also seems to be 2 cameras in the front with a speaker system at the top right. There also looks to be a headstrap located at the top which is a newer design compared to the Vive Focus.

tags: vive cosmos vr headset
previous Could Pub Darts Do A 180 On Reality and Become a VR Experience?
next Pimax Announces The New Era Of VR 2.0 With Their 8K HMD At CES 2019
Related Posts