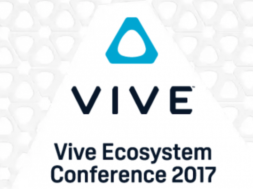 HTC has been a formidable competitor to Oculus on the VR front but the company lacked presence with official events held in the states. Oculus has been holding an annual conference called Connect where they showcase current and upcoming projects which has brought excitement throughout the industry. But today, HTC has revealed a conference of their own called the Vive Ecosystem Conference 2017.

While the conference won’t be taking place in the U.S., they have put together an event to showcase their current and future projects for the VR industry. The event will be taking place on March 27th – 28th, 2017 in Shenzen, China, where HTC will announce some special things at the show. They will have keynote speeches at the Vive Ecosystem Conference with the first speech being held at 9AM GMT+8 on March 27th. HTC will address the topic of a global VR ecosystem and more.

This is a dynamic strategy by HTC to create larger footprints on a global scale with their VR technology. However, there is a lot of vagueness around the 2017 Vive Ecosystem Conference where specific information is unavailable. VR & FUN has reached out to HTC for more information in regards to the event.

Being held in China, the global audience base might be bale to live-stream the event to catch some of the keynotes that will be held at the Vive Ecosystem Conference. Updates will soon be available.