How to pre-order your Oculus Touch

How to pre-order your Oculus Touch

For the people that pre-ordered the Oculus Rift, they get the first chance to pre-order the Oculus Touch. Oculus Touch are the new official controllers for the Rift that are motion tracked.

Here’s how you can pre-order the Oculus Touch Controllers For the Rift Headset:

You’ll be able to pre-order the Oculus Controller up until 11:59PM PST on Thursday, October 27, 2016. After that date and time, you’ll no loner have the option to pre-order the motion tracked controllers.

Once you’ve successfully purchased the item, you’ll be sent a confirmation email letting you know that you’ve officially been submitted to receive the Touch controllers. 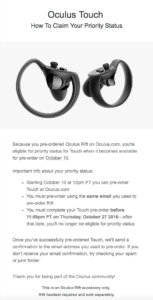 Then you are set to go!